Marijuana Plants are living material. They’ll stay healthy if we make sure all the climatological conditions are right. We’ve already stated earlier that this involves light, air, water, clean surroundings, and green fingers. Controlling the climate, in all its aspects, is the best way to prevent diseases and insects. That doesn’t mean that the careful weed grower, who has everything well in order, will never be bothered by plant diseases and pests. We do want to say that good climate control considerably reduces the risks of disease.

An easily preventable form of disease is deficiency- or deprivation illness. The plants lack some necessary ingredient in their feeding. A shortage of iron produces yellowed (and falling) leaves. The pH value plays an important role in the prevention of deficiency disease. Keep the pH value around 5.8. If this value is too low, the plants can’t absorb calcium as well. Consequence: the osmotic processes are impeded. Too low a pH number causes less iron in-take, with the well- known results. A second form of deficiency disease is caused by a shortage of the primary nutrients (NPK). It often involves a lack of nitrogen (N). A nitrogen shortage delays growth, and makes the lower-most leaves turn yellow and drop off.

Less often, we see a shortage of phosphate (P). With a phosphate shortage, the leaves turn deep green, and they remain small. Yellowing and dying lower leaves happen here, also. Potassium shortage (potassium is ‘K’) is another seldom-occuring problem. The noticeable feature is first the yellowing of the point of the leaf, after which the whole leaf turns yellow and brown, and dies off. A lack of potassium is more often caused by an acidic soil than by an actual potassium shortage. So, make sure to maintain an optimal pH! The remedy advised for these kinds of deprivation sicknesses: use NPK fertilizer. We don’t encounter deficiency disease as a consequence of a shortage of the secondary nutrients very often. This usually involves a lack of magnesium and/or calcium. It can usually be remedied by using an NPK mixture containing trace elements.

The same counts for the micro-elements. We must make an exception for iron, since there is rarely too little iron. In that case, the pH value is usually too high. Moulds can completely destroy a garden in a short time. If the climate in the grow room is well-controlled, moulds, in general, have little chance. Moulds and fungi thrive very well under hummid conditions, preferably without much air circulation. Under these circumstances, mould spores, which are always present in the air, search for a spot to grow into mould cultures. If you don’t succeed in preventing mould growth, then you must do something about it as quickly as possible. With light mould growth, immediately remove the affected plant parts, and then create a climate in which cannabis does well, and moulds don’t (good ventilation, control of humidity and temperature, and putting your plants on a medium which is not too wet).

If there’s already too much mould present, you don’t have much choice but to spray with poison (fungicide). Repeat the treatment after a few days, even if you think the first application has definitely helped. Still, improve climate control and groth conditions. Fungicide treatment should always be a last resort. It’s not healthy for young plants or people, so here, it’s also: ‘prevention is better than cure’

An often-occuring mould affecting cannabis is pythium. This mould causes root-rot, and rot in the lowest part of the stem. It appears most in young plants, and in cuttings. Larger, healthy plants are less sensitive to pythium. Plants get ‘falling-over disease’ with a serious pythium attack. We don’t have to explain what that means Pythium is recognizable by the bark at the base of the stem turning brown. In the beginning, the ‘brown attack’ is easily removable. Later, the rotting process eats deeper into the base of the plant. Pythium is a fungus which flourishes best in wet and humid environments. Pythium spores spread only through water. Two kinds of spores are formed; Swarming ones and stable ones. The swarming spores germinate best at a temperature of approximately 15 degrees Celsius, while the stable spores germinate if it’s relatively warm; around 28 degrees C. To prevent a pythium attack, a constant temperature of the soil or rockwool is needed. Large fluctuations in temperature should be avoided. Pythium can only be fought in a limited manner with chemicals. A proper relative humidity must also be maintained (not too high). Leaf moulds, such as mildew, and thread moulds occur less frequently than pythium.

Mildew can cause tops to rot, among other things. Also here counts: ensure optimal climate control. Contrary to other moulds, mildew flourishes well at a low relative humidity. Mildew can be more easily fought with chemicals, and fortunately, is not often found with cannabis. Rotting tops occurs mainly at the end of the flowering phase. The more compact the plant, the bigger the chance for tops to rot. You can identify toprot by the sudden yellowing of the top-most leaves. These yellow leaves are fairly loose on the plant, and can be easily removed. To prevent the whole plant from being affected, you must, unfortunately, remove the whole top. The appearance of toprot can be prevented in some cases, by lowering the relative humidity during the dark period.

The most frequently occuring plague in cannabis cultivation is spider mite. A spider mite isn’t an insect, as many people think, but actually a tiny spider. A spider mite is small, and difficult to discover for the inexperienced eye. But the damage caused is certainly visible. The mite feeds on the sap of the plant, mostly underneath leaves. White specks appear on the upper side of the leaf. After that, you can find spider mites on the undersides of the leaves, and on the stem of the plant. Spider mites make small webs, which you can detect by spraying with water. If there aren’t to many spider mites, you can try to get rid of them by removing them by hand. A tedious job 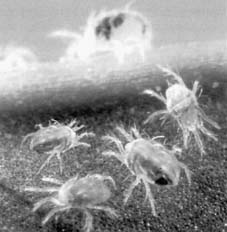 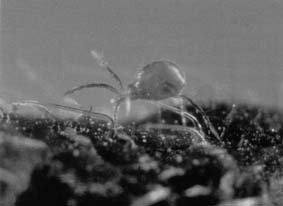 Treating with insecticide generally gives a better result. In any case, repeat the application after a few days, otherwise, you risk the chance that the whole garden will be eaten. Spider mites can also be controlled with their natural enemy Phytoseiulus persimilis; a predator mite which feeds on spider mites. White flies are also a formidible opponent of the weed grower. It can’t be repeated enough: control the climate, and take care of healthy plants. Then, insects will have the least chance to propagate. 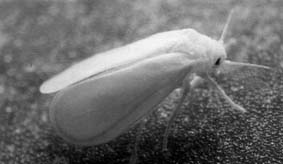 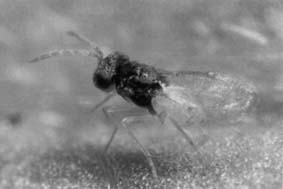 White flies behave just like spider mites. The insect hides underneath the leaf, and sucks it’s dinner from it. Result: white spots on the top side of the leaf. White flies are easily spotted with the naked eye. If you shake the plant a little, they’ll fly around. They look like little white moths, around 2 millimeters in size. A sizeable infestation can be combatted with insecticide. If you’re not so anxious to use such strong methods, you can purchase a certain type of ‘assassinator’ wasp: the ichneumon fly (the Latin name is Encarsia formosa). This natural enemy doesn’t sting people, but works well at eliminating white flies. Since it’s only a small wasp (smaller than the white fly itself), it takes a while before all the white flies have dis appeared. Additionally, you have to put new assassinator wasps out approximately every two weeks. 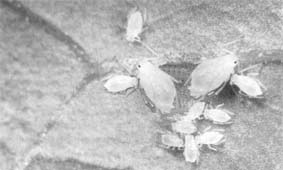 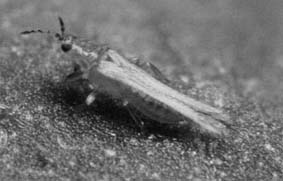 Another common herbivore is thrips. They are small, fast-moving insects with wings. They rasp, or grate the leaves open, and then suck the sap out. Thrips prefer bloom tops, and fresh, young leaves. Affected leaves have shiny, silvery spots. This is caused by the thrips, which suck the chlorophyll out of the leaves. In spite of the fact that they’re small, you can see thrips marching in columns on an infected plant. Thrips can be fought with insecticide. It’s more environmentally friendly however to unleash the thrips’ natural enemy: the predator Amblyseius cucumeris. Lice are found inside as well as outside. During the summer, when lice do the best outside, they also do as well inside. Lice are the most interested in plants with questionable health. There are two methods to kill lice: spraying with insecticide, and setting out assassinator wasps. The problem with most flying pest- destroyers is that they’re attracted by the high-pressure gas lamps, which draw them to a fiercy death.

The starting point for cultivating cannabis is successful climate control. This goes two ways: the plants do well and produce the greatest possible yield, and diseases and pests get the least possible chance. So, create a good climate, and don’t forget hygiene If you’re bothered by diseases and/or insects, preferably use natural methods of control rather than chemical remedies. You can fight your pests by releasing their natural enemies, or by spraying with organic solutions for diseases and/or pests. Use chemical pesticides only if nothing else works. Always stop using pesticides a few weeks before harvest, otherwise, you’ll be smoking some of the poison later. Ultimately, fighting diseases and pests works best only if you know how to optimally control the climate at the same time. Along with climate control, the prevention (and if necessary, curing) of deficiency disease demands an optimal mixture of fertilizers, and the control of the pH.